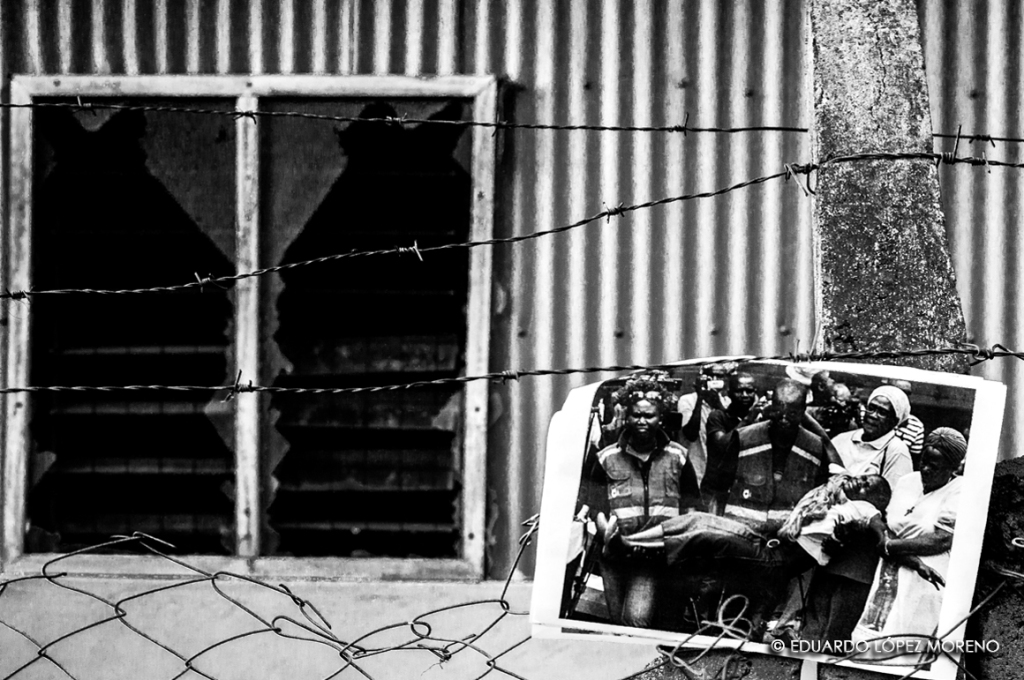 148 students were killed and several injured in an attack claimed by a terrorist group executed in cold blood on the night of 2nd April 2015 in the Kenyan Town of Garissa, close to the Somali boarder. 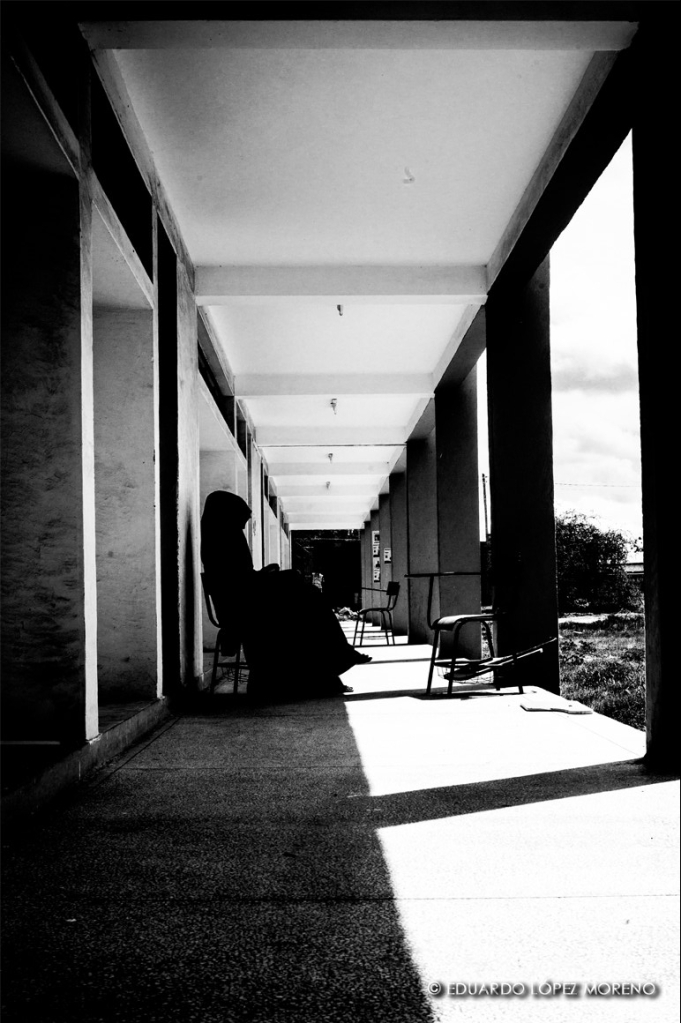 Classrooms, dormitories and refectories were tinted in red and sadness by this terrorist group. Two years after the attack, still remain too many empty chairs and empty hearts in this college; still too many empty lockers and missing students’ footsteps. However, there are also clear signs of hope and change. 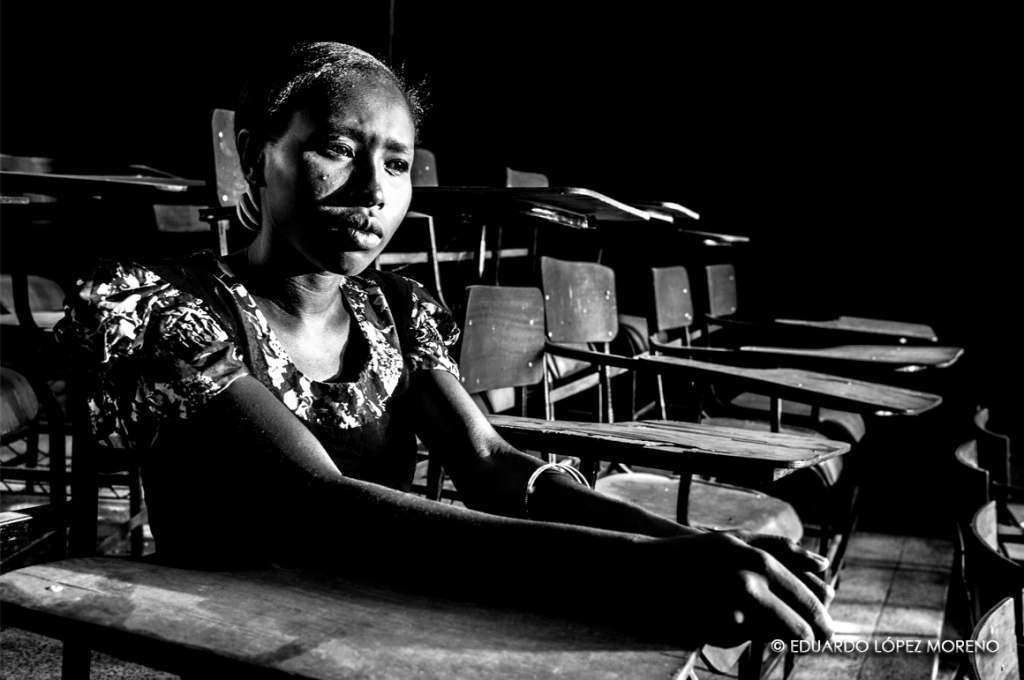 Despair and sorrow have been transformed by the vocabulary of hope and self-respect. Although the absent ones are still present in cell phones, memories and half-spoken words, the University has recovered the reds, yellows and purples of daily life that characterize the students’ clothes. 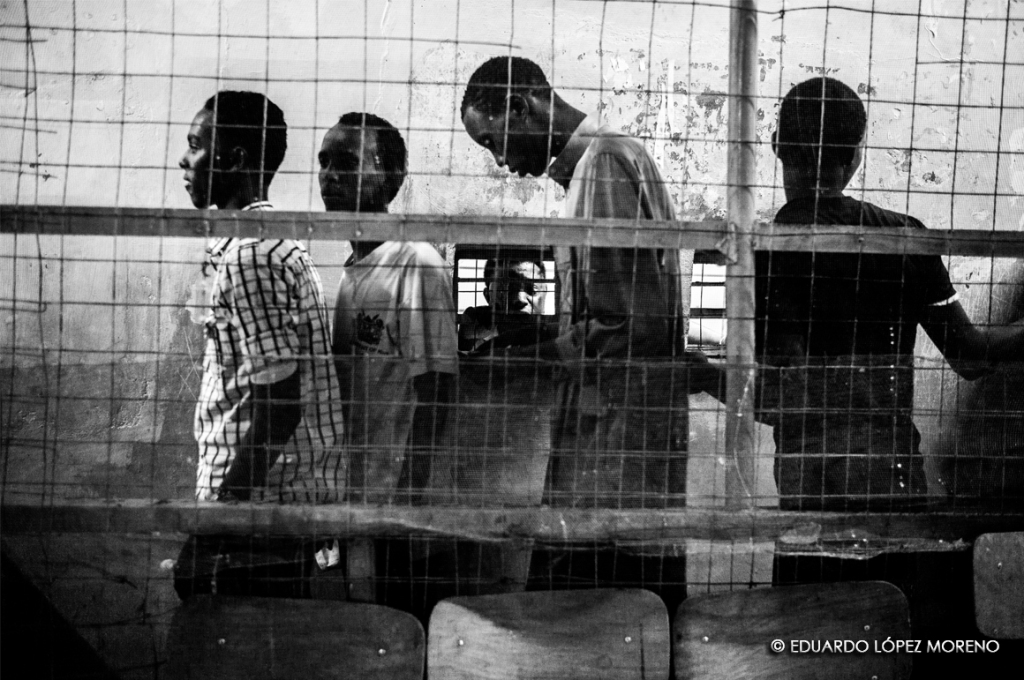 Normality has taken over again. Students, teachers, blackboards, notebooks, halls and corridors are all writing in different forms a new chapter of a University that remained closed for way too long after the attacks. Education, culture and the possibility to socialize and exchange are the best antidotes to the ideology of extremism. Open classrooms close the door to terrorism. 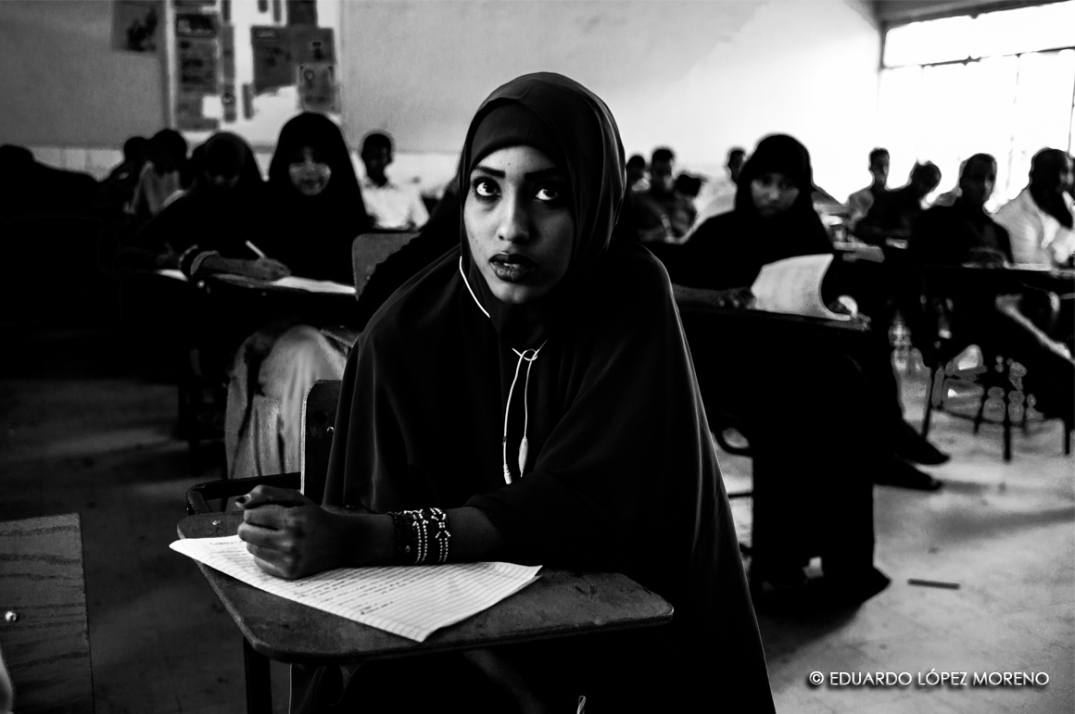 The photos presented in the exhibition held in the United Nations show how by working, socializing and staying together it is possible to create a unit of defense.  Symbolically the only imposition is the force of the image that conveys a message of resilience, hope and change.

A history of hope and change 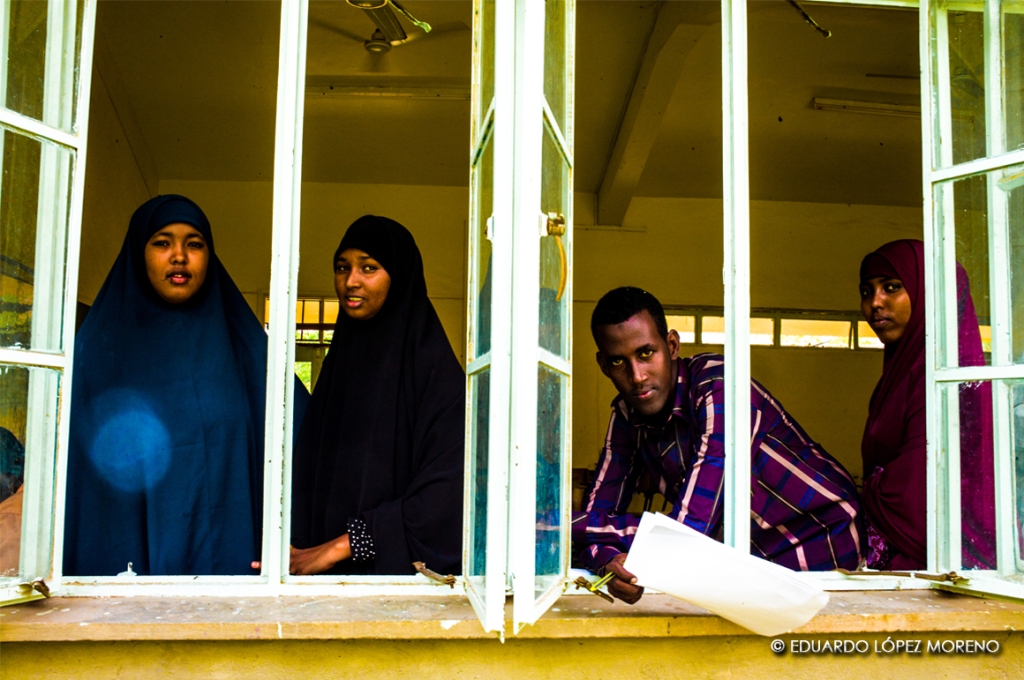 A Photo Exhibition –as a visual documentary–, has been prepared to illustrate how a history of hope and change is taking place. The Principal of the University, teachers, students and workers have all opened the doors and hearts to let the world know how Garissa University operates now. 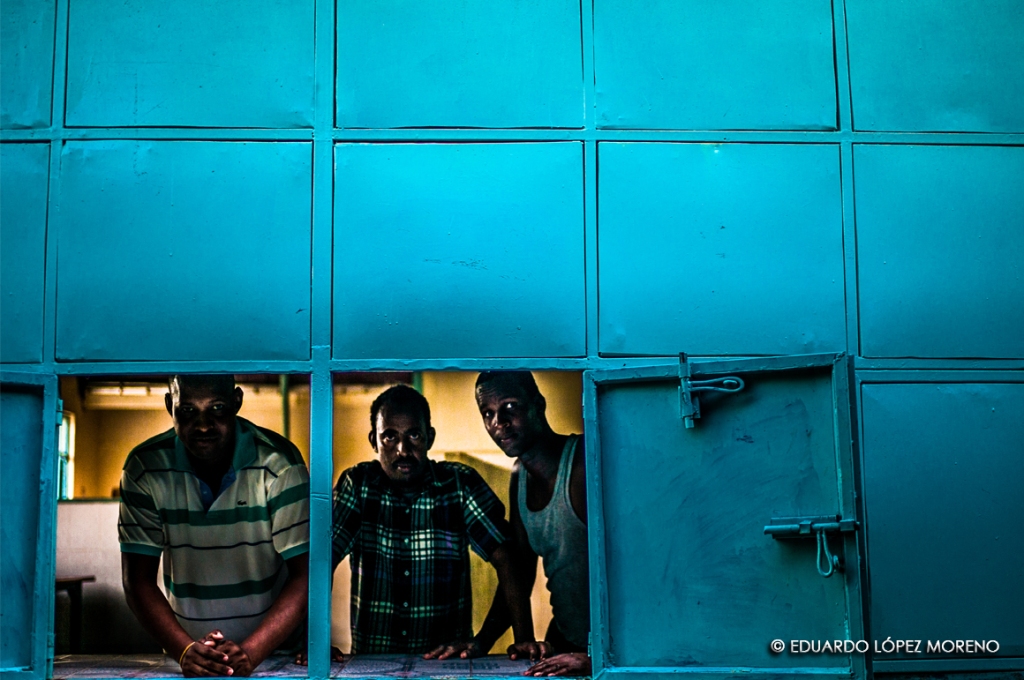 After presenting a limited number of images that evoke that terrible day of 2nd April 2015, the exhibition displays black and white photos that represent a slow transition for a better life. A third segment of images in color depicts faces, smiles, women talking, students walking, professors teaching and young men preparing for an exam. A final part illustrates life around the teaching place, showing students interacting in the canteen and the dormitory, as well as secretaries and administrative staff in the office areas. 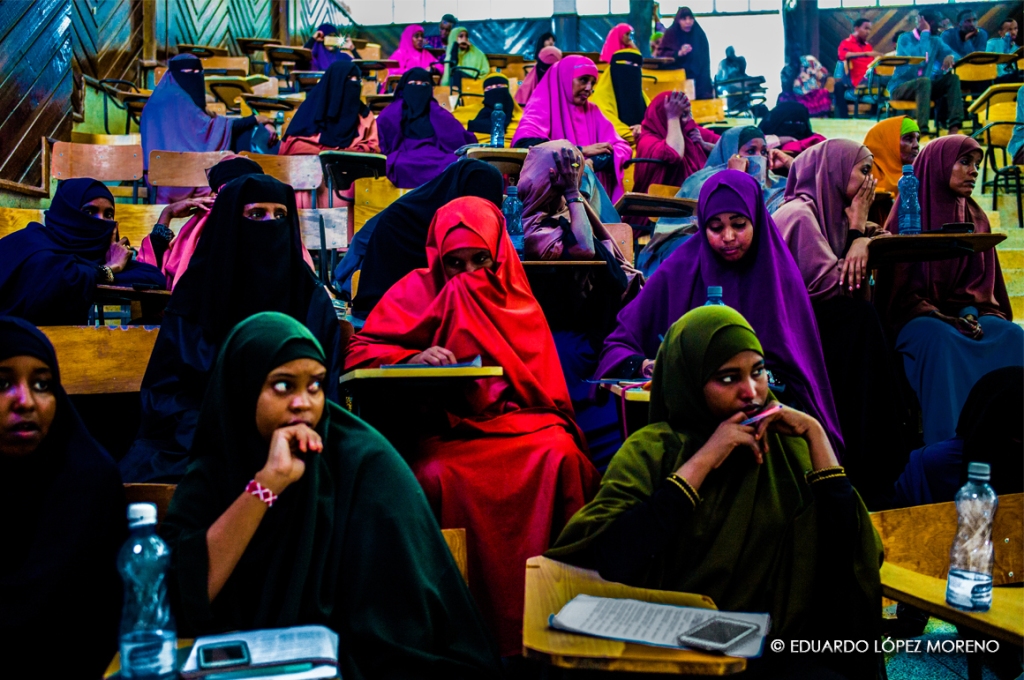 This is a visual attempt to present the optimism that can take the form of a pen in the hand of a young woman, a desk full of books, a group looking through the window frames, a crowded place where old persons learn about peace in the amphitheater, and very clean classrooms where desks are not properly aligned.